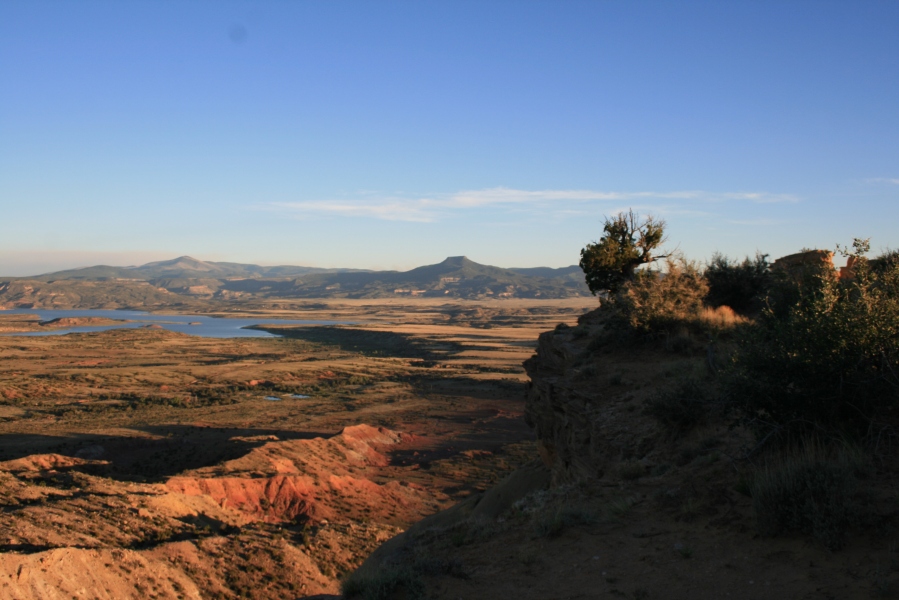 After two and a half weeks in the high-altitude New Mexico desert sun, I confess my summer freckles have returned. I like to think of them as my skin’s seasonal blossoming. They’re little circular perennials, roots dug deep and hibernating all winter long, waiting for a warm week to reappear.

I stayed in Abiquiú, New Mexico, a rural town outside Santa Fe, in June to work as an instructional counselor for a creative writing class for gifted and talented high school students. Ghost Ranch is now a retreat center, made famous by the renowned artist Georgia O’Keeffe, who stayed there for many summers and eventually lived there full-time.

This was my first time to New Mexico even though its entire northern border is most of Colorado’s southern border. The high desert there was overrun with crooked trees and low brush—juniper, sage, chamisa.

At the welcome center for Bandelier National Monument I flipped through samples of dried and pressed plants, matching them to what I’d seen on our hike around the cave dwellings, their ruins. These amazing light brown sandstone cliffs full of holes and pockmarks, made hollow by centuries of erosion.

Circular structures ringed with stacked stones were built and called kivas by the Pueblo Native Americans who lived there. These buildings were used in rituals, especially coming-of-age ceremonies for young men wherein the structure functioned like a sweat lodge.

Bandelier National Monument is a dormant volcano featuring an enormous caldera, basically the collapsed crater-like center of a volcano since overgrown with grasses, shrubs, and thirsty western high-altitude trees like cottonwoods and aspen.

As our class stopped beneath some of the less accessible cliff dwellings (reached via a series of ladders) for lunch, we wrote in response to a prompt about rituals, and it occurred to me that the caldera could be seen as a sort of first kiva—the stone circle first laid by some ancient, powerful hand. This is what it looks like when the land forms circles—a collapse, an eruption, layers of volcanic ash pressed into earth, then sandstone.

The town of Taos contains the Taos Pueblo, a UNESCO World Heritage site and one of the longest continuously inhabited villages in North America. Here the Pueblo people built their multi-story homes out of adobe brick, which consists of clay, hay, and water.

Both the mortar and the plaster which covers the bricks are made of mud. Cedar logs were laid across each structure to help form and support their ceilings. These ceiling also functioned as the floor of the story atop it, accessed by wooden ladders.

Because of the materials of these structures, it is impossible to outfit them with modern plumbing and electricity. Our tour guide told me only five families remain as full-time residents here, though many more keep their ancestral homes while they live primarily in the town of Taos, or elsewhere on the reservation.

While walking around Taos Pueblo, I saw a man setting up a table with a display of turquoise jewelry underneath a hay canopy in front of an adobe home. We chatted, and he invited me into the home he said had been the birthplace of his great-grandfather, and inhabited by his family many, many generations before that.

It was a simple, surprisingly cool single room with a small fireplace in one corner. He explained to me the technique by which the Pueblo people made the chimney. They took a cedar trunk and covered it with adobe plaster. Once dried, they then set the wood on fire, which would leave them with a hollow, cylindrical adobe structure. A circle of sky, open to sky.

One night on a silent walk to Matrimonial Mesa at Ghost Ranch, I pointed out to the students the hoofprints of a deer in the mud. In a place that receives fewer than eight inches of rain a year, it had rained that afternoon. One student had spotted a garden snake who’d been coaxed out of the shadows by the cool rain. And the small, halved circles of the imprints of hooves wandering from the dirt road to the arroyo’s cottonwoods, weaving between chamisa and juniper.

On the mesa that night we watched the scattered, sputtering circles of stars come into being. We lay there quietly, listening to the high-pitched echoes of chirping bats as they drew their own looped circles in the air above. Kivas, nightly natural rituals. Circles in space and time. Each time we return to repeat the ritual, each time we circle back, something is different. We hold constant what we can, but we treasure everything.

I live my life in widening circles
that reach out across the world.
I may not complete this last one
but I give myself to it.

I circle around God, around the primordial tower.
I’ve been circling for thousands of years
and I still don’t know: am I a falcon,
a storm, or a great song?

Georgia O’Keeffe painted Cerro Pedernal (Flint Mountain) over forty times. The story goes that she took any paintings with which she wasn’t satisfied, drove down the mesa, and burned their canvases right there in the desert. About Cerro Pedernal O’Keeffe said, “God told me if I painted it enough, I could have it.” She returned and returned. She ritualized the process.

Locals heard of her affinity for bones and brought them to her, bleached white by desert sun and preserved by desert air. She painted a series centered on a cow’s pelvis. There are circles here, too—the spaces for each leg, the ball of each femur joint, the socket space. She painted it so close up, sometimes, that you can’t tell what the curves are a part of at all, what the lighting reveals. 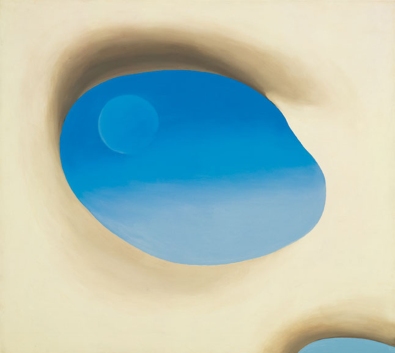 From Georgia O’Keeffe’s “Pelvis” series, with the moon in the background 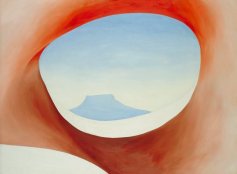 From Georgia O’Keeffe’s “Pelvis” series, with Cerro Pedernal in the background 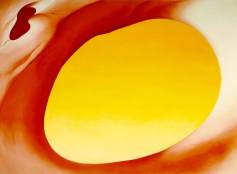 Circles form from gravity, from wear and falling and moving and the difficulty of moving. Everything softens over time, forgets its corners, collapses. The desert is a land of circles, the simplicity of curves, the complexity of a single eye.