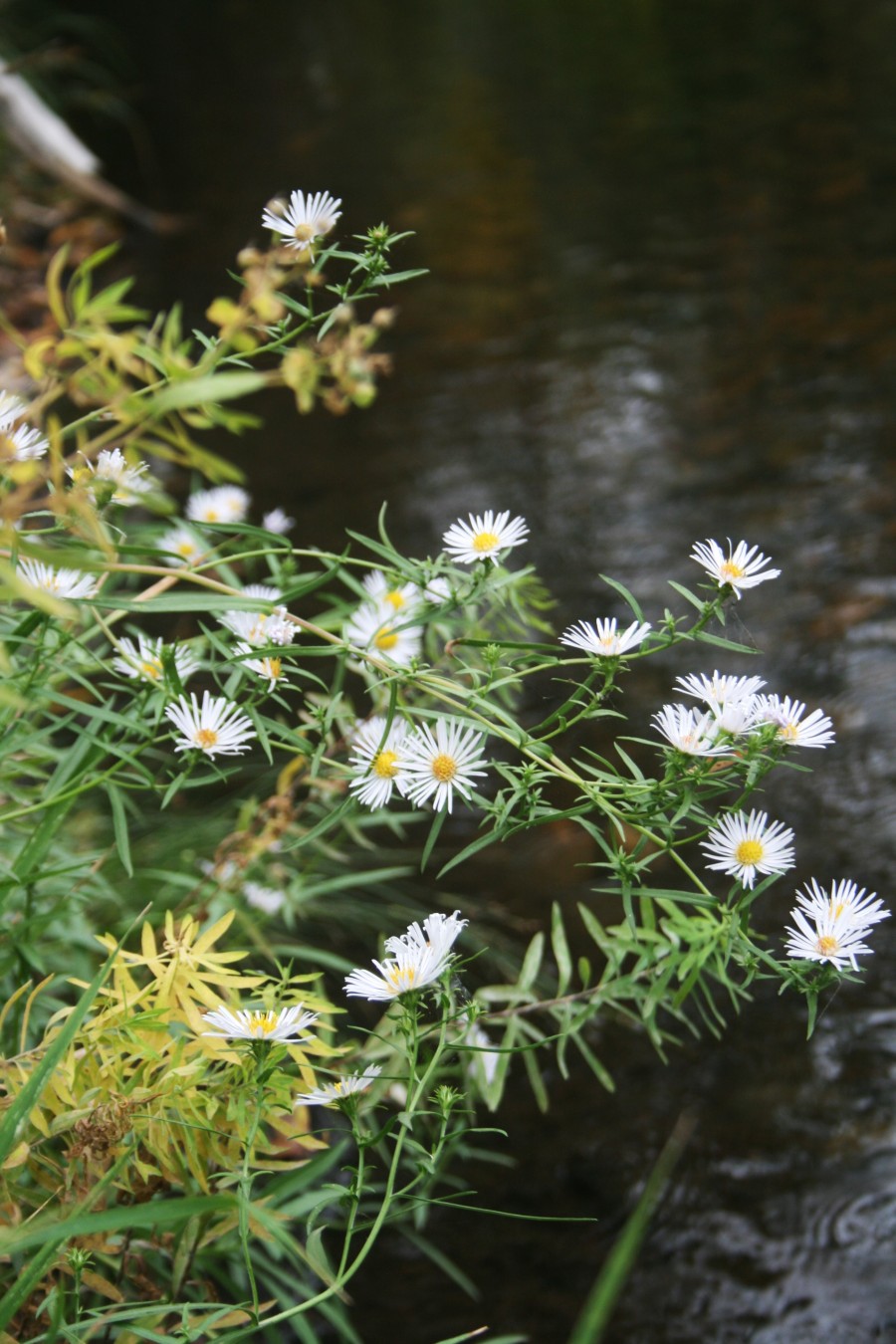 As many of you know, I began my graduate studies this fall at Colorado State University in creative writing. An assignment in one of my classes required that I choose an outdoor “site,” which I am to visit on a regular basis, take notes, and then journal about it later. I’ve been visiting the Cache la Poudre River, which runs through Fort Collins, via the city-owned Poudre Trail, for a little over a month now. On my last visit, Friday September 30th, I took my camera along with me. Here are some excerpts from journal so far, along with a few photos.

I arrived at my site at 3:20PM. It was 86° Fahrenheit and mostly sunny, with puffy white cumulonimbus clouds in the north. I was sitting on the south bank of the river, the water flowing east. The river appeared almost a copper color because of the stones in its bed. The current was rather swift –as I could tell by the passing inner tube floaters—like a slow jog. According to the markings on the underside of the Poudre Trail pedestrian bridge over the river, the water was just under three feet deep.

All around me were dogs, children swimming, and more people walking, running, or biking on the paved trail. Through the trees and over the sound of rushing water I could hear people cheering, laughing, and chatting. There was a constant sound of crickets chirping, and an occasional whisper of breeze through foliage.

In the water, a fresh four-foot Russian Olive branch with all its leaves floated by. I noticed stray, straight spider-silk threads in the grass and in the elm branches above me. Slowly a dragonfly flew by me toward the east. Some individual sparrows crossed the river as well. Dogs barked in the distance, and thunder could be heard coming from the north; the clouds grew darker across the river. 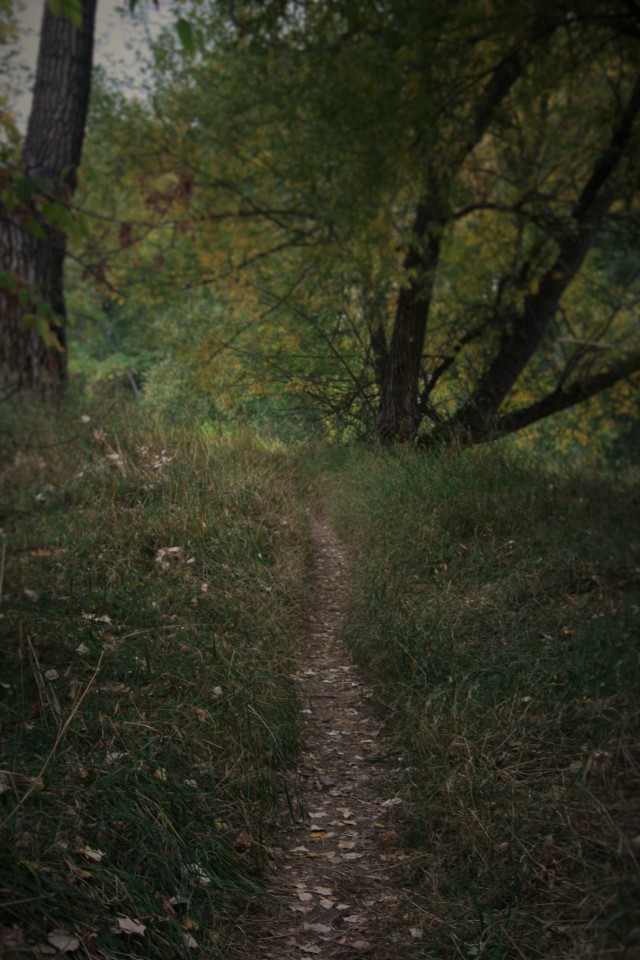 I always thought the Poudre River was named after snow powder, especially since it drops 7,000 feet in elevation from the Rockies through a narrow, chiseled canyon, to conjoin with the South Platte River east of Greeley, Colorado. It actually refers to French Canadian trappers, in the early 1800’s, hiding their cache of gunpowder there during a particularly bad blizzard. The Poudre River is Colorado’s only nationally recognized “Wild & Scenic River.”

Behind me, a woman running west clears her throat. Two bikes tick east. The sun clouds over.

Today the Cache la Poudre River is just over one foot tall, the pedestrian bridge informs me. 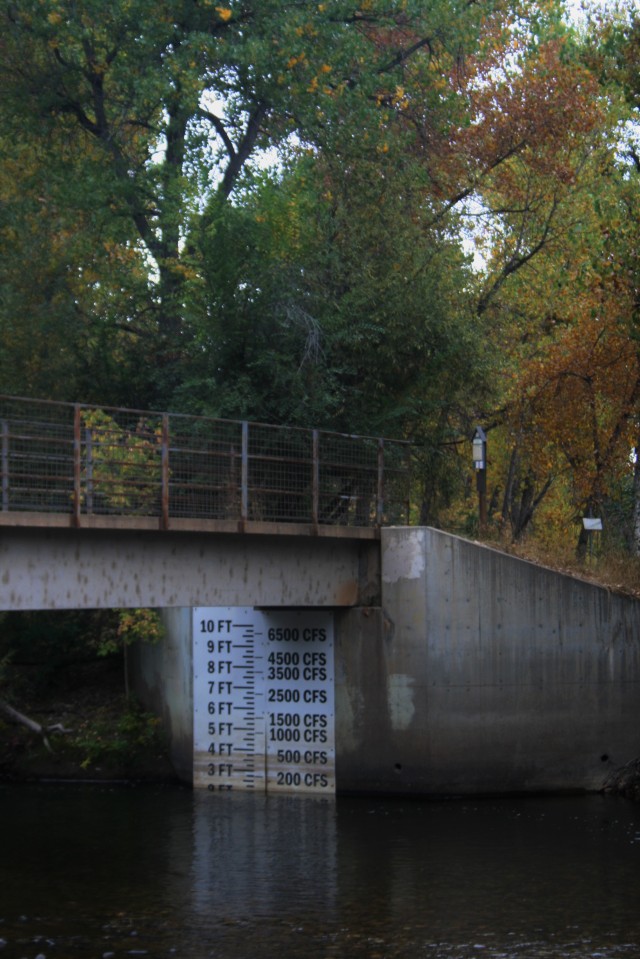 This means about 775 gallons of river water, of Rocky Mountain snowmelt, are flowing beneath that bridge every second. What seems like a humble stream to the eye—especially with monumental rivers in my mind, the Colorado and Snake nearby, the New and Mississippi and Chattanooga out east—is really a powerhouse, always on the move. Small yellow leaves are floating downstream, to the east, away from the Rocky Mountains and toward the South Platte River, toward the heartland. I read that brown trout spawn here in the fall, but I see no fish in the clear water down to the copper-y bottom, littered with round granite stones. Sometimes I hear the fish—a sudden catch of water, white flash slap above the surface.

Along the bank two blue jays stutter squawks at one another. One flies into view and lands on a yellowing cottonwood branch. His body is a jewel blue and he wears a white collar just above his breast, beneath a blue cockscomb. Later I learn this is the edge of the blue jay’s livable range, as far as they come; the foothills of the Rocky Mountains halt them the way they halted railroads, the way they still halt clouds and precipitation.

I think about the river, about the trout. What would it feel like to live in water constantly flowing in one direction? Not like an ocean where the tide is a rhythm of give and take, but always east, the way our ancestors felt pulled westward continually. I ask a fisher friend about the trout—the brown, the rainbow, the cutthroat. He says you can often go back to the same spot on the Poudre or Snake or wherever, the same hole or stone, and catch the very same fish—they don’t stray too far. My concept of fish life has been shaped mostly by the story of spawning salmon and—let’s face it—Finding Nemo, so this was news to me, that fish don’t drift or migrate or explore in spite of the debris that floats right by, that the river doesn’t become their timeline on which to travel. I thought a good metaphor might be that little conveyor belt in sushi restaurants that slowly slides enticing sashimi and rolls right before your eyes, for the taking. I guess a river might feel more like that to a fish—food constantly coming and going all day, all night, abundance set spinning by the engine of gravity, by the churning of season, of freeze and thaw.

I count thirty-five bleats of train horn in the span of several minutes. A helicopter hovers somewhere to the south and car engines rumble to the east. Behind me, bikes pass and dog leashes jingle. Occasional bits of conversation slip through the weeds—two students stressed about the new semester, a mother making safety-related requests of her young child on a miniature bicycle, two middle-aged women building each other up. A propeller plane’s engine rattles from above, behind cover of low, gray clouds.

I have just heard how little land in this country remains untouched by human-generated noise. If not an interstate, then a highway. If not a highway, then a railroad. If not a railroad, then trails for ATVs or snowmobiles. If not a trail, then a reservoir with a marina. And if no marina, then planes etching their contrails above, or helicopters leading rescues of people lost in the wilderness. Silence deserts. The scarceness of silence. This must have devastating effects on animals, especially those who rely on their hearing to find prey, to hunt, to stay safe, to not become prey, to survive.

When I hear a sound—a splash of water, birdsong, crackle of twigs or dry grass—I hope for a sighting of an animal—a trout, a blue jay, a crow, a grasshopper. When animals hear our omnipresent noise—engines whirring, tires squealing, horns honking—what do they hope for?

All the vegetation and leaves are more yellowing today, rustier—oxidized colors. There was a light drizzle all morning. My field notes are speckled with the occasional raindrop ink-stain. The Poudre River was measured at two feet high, higher than my last visit because it’s been raining up in the mountains, to the west.

Little white wildflowers upstream catch my eye. I walk over unsteady pebbles and a large cottonwood root to get to them. The root is far enough away from any trees that it’s impossible for me to tell to which it belongs. Each flower is in various stages of unfurling—some are fully open, dripping their petals into their watery reflections.

I find myself thinking how it would feel to live in a river that can get as low as one foot deep—to have distance infinitely available to you (seemingly), but know your explorations, your knowledge, were all limited to one foot by the width of the river by its length. I suppose human life, until the inventions of the airplane and rocket-ship, is fairly limited in that way as well—we’re basically stuck to the earth’s surface, most of us. This, I think, is the origin of the desire to fly, our envy of birds. We can’t see the earth’s rotund nature from our limited depth, the slice of air in which we live. We’ve had to escape this space to see the world for what it really is—a sphere remarkably like and unlike any other. 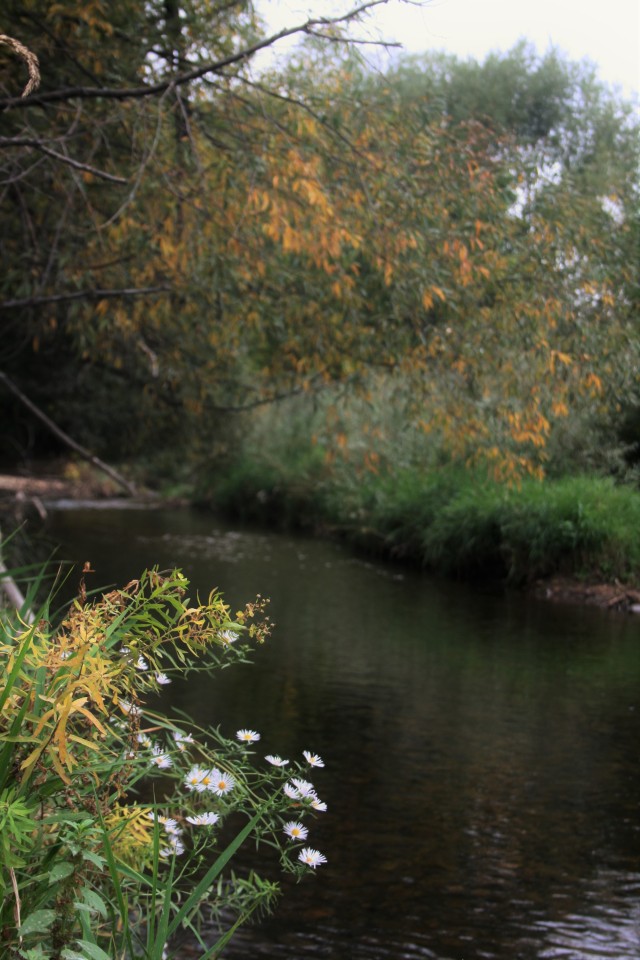 2 thoughts on “Visiting the Poudre River”