When I was little, I used to asked my Oma (“grandma” in German) how her hands were so soft. She told me that her kneading bread softened the skin of her hands over time.

Oma passed away earlier this year, in case you didn’t read my earlier blog post about her. Oma made this one particular type of bread so often that our entire family refers to it as “Oma bread;” and I’ve been meaning to make it since her funeral this summer. I acquired the recipe from my uncle Tom, my dad’s younger brother, who has made it many times. I shy away from bread recipes that require kneading since, I don’t know, that sounds like a lot of work, right? When I lived in Chapel Hill, I had access to delicious, fresh bread everywhere. The Guglhupf, an amazing German bakery in Durham, North Carolina, was only twenty minutes away. To note, if you’ve never visited a local bakery, fresh bread is CHEAP!

There aren’t any bakeries in Laramie that make fresh bread (there is one that focuses mostly on wedding cakes and other fancy pastries), so I’ve been making a lot of this King Arthur flour recipe, which doesn’t require any kneading (hooray!). It’s a great first loaf if you’ve never made bread before. It’s also fairly versatile; I’ve used it for circular sourdough-esque loaves as well as baguettes.

I felt like baking something this past Sunday because, well, it was Sunday. And the weather is beginning to deteriorate; we’ve had such a wonderful fall in Laramie this year! But today it snowed, and is still snowing.

And the email Tom sent me with the recipe has been burning a hole in my inbox. I told Matt, “I think I’m going to make Oma bread today,” and he asked, “Home-ah bread?” I said, “No, OMA bread – duh!”

Congratulations! You’ve made OMA BREAD!!! Taste it to understand our family’s obsession. Oma bread is good all by itself (obviously!), or with a little raspberry jam – organic, if you’re eating it in the spirit of Oma herself. I’m considering making some French toast with it one morning. What do you think? 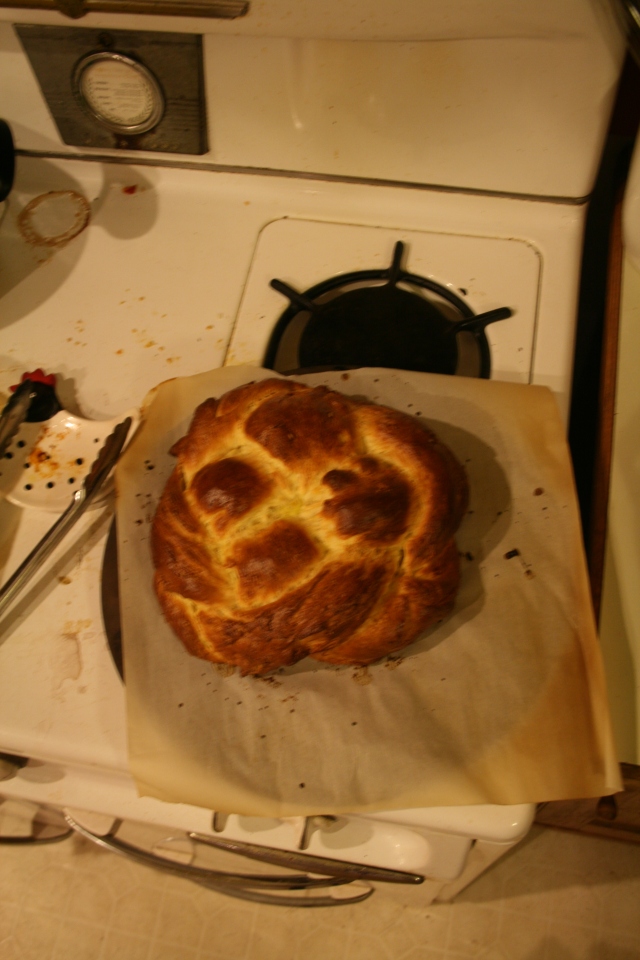